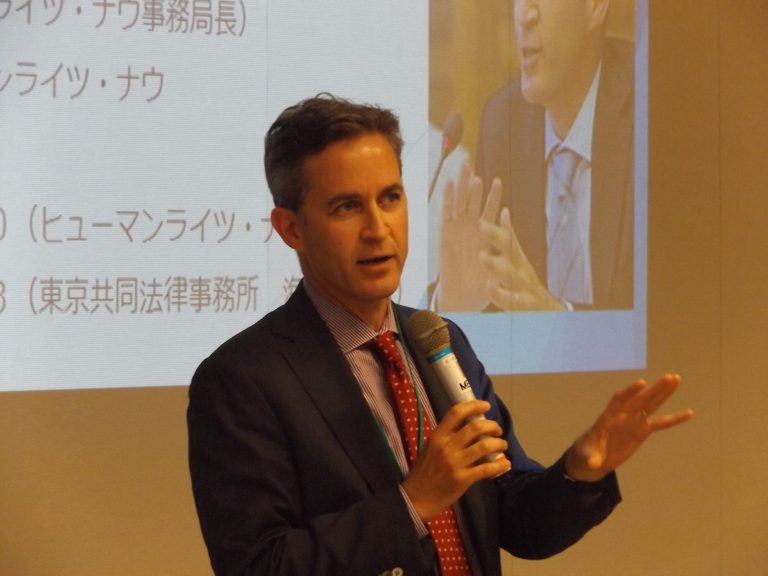 HRN hosted the United Nations Special Rapporteur on Freedom of Expression David Kaye to speak on the subject of Japanese freedom of expression and freedom of the press on June 2, 2017.

Mr. Kaye’s remarks follow an on-site survey conducted last year in Japan which he released as a report on May 29 focusing on the freedom and independence of the press. He expressed that there is a strong legal framework for this freedom, Article 21 of the Japanese Constitution, which protects all forms of freedom of expression, and that this liberty must be protected for democracy and civil society to function.

The report also identifies several possible areas of concern. First, the media is not sufficiently independent from government regulation. Mr. Kaye recommended that this issue can be addressed by the creating an independent broadcast regulator. Second, the media doesn’t currently have the benefit of organized solidarity among journalists, a concern that has been raised by many of them. This deficiency allows their employers to exert pressure on their reporting, especially when critical of the government.

In the Q&A session that followed, Mr. Kaye was asked about the Special Designated Secrets Act, which creates a system of penalties for the disclosure of classified information. He noted concerns that this scheme undermines protection of whistle-blowers and journalist reporting on sensitive issues, while weakening the public’s access to vital information needed for a civil society.

Mr. Kaye also responded to a comment made by Deputy Chief Cabinet Secretary Koichi Hagiuda earlier in the day that his report’s criticism of the government’s policy for the Broadcast Act does not reflect the government position.

Understanding this criticism and Mr. Kaye’s response requires some description.

Mr. Kaye’s report noted several statements by the government that the Broadcast Act gives the government, and the Minister for Internal Affairs and Communication in particular, the power to not approve or revoke the license of a broadcaster it feels is politically biased, as well as threats to use that power against such broadcasters. The report was concerned that this policy chills critical reporting of the government as journalists self-censor their reporting under the shadow of the threat, and recommended that the government of Japan change its policy.  Ms. Takaichi’s criticism was that the threat did not exist because the government had never actually used the Broadcast Act’s power to revoke a license based on the content of reporting.

In response, Mr. Kaye noted that the government has nevertheless claimed the power to revoke licenses under the Broadcast Act as part of government policy since 1950, and that his concerns were not about specific actions the government of Japan had actually taken, but prospectively about the ability of the government to revoke licenses at any time under their claimed power in the future, which was a continuing concern for media independence and freedom of expression. Furthermore, merely the threat of license revocation still chills critical reporting now even if it is not used but only threatened. Finally, he noted that the government needs to fix it as a long-standing policy threatening press independence and freedom if they are to be a healthy democracy.

Please find the video from the event here.

For more information, please see the report of the special rapporteur and the response by the Japanese government located here.