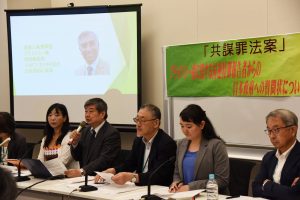 On 18 May 2017, Joseph Cannataci, Special Rapporteur for the United Nations on the right to privacy, issued a letter on a bill proposed by the Abe administration, known as the Conspiracy Bill, which amends the “Crime of Preparation for Terrorism and Other Acts.” The letter is available here: Joseph Cannataci Letter on the conspiracy bill.

In the letter, Cannataci expressed “serious concern … that the proposed bill … may affect the exercise of the right to privacy as well as other fundamental public freedoms given its potential broad application. In particular I am concerned by the risks of arbitrary application of this legislation given [its] vague definition[s] … and … overbroad range of crimes….” The letter also expressed concerned about the bill’s potential to target legitimate NGO activities, as it does not clarify what is an “organized group” or “planning” and “preparatory acts” for terrorism which may allow authorities to arbitrarily target NGOs, as well as the possibility of unwarranted surveillance which may violate people’s right to privacy, as the bill encourages it without providing safeguards.

In the Japanese government’s first response, on 22 May, Chief Cabinet Secretary Yoshihide Suga protested the letter denying that it would arbitrarily restrict privacy and freedom of expression. In an email to Reuter’s reported on 23 May, Cannataci responded to Secretary Suga’s protest as having “no substance”, and that “Unless and until corrected on any point of fact, I stand by every single word, fullstop and comma of what I wrote to Prime Minister Shinzo Abe…. There is absolutely no justification for the Japanese Government to behave in this way and push through seriously defective legislation in such a rush.”

On 29 May, Prime Minister Abe also denounced Cannataci’s assessment as “extremely unbalanced” and “hardly that of an objective expert”, and on 30 May his cabinet approved three official statements condemning the letter as “based on misunderstanding”. Justifications given by the Abe administration that the bill is directed towards fighting terrorism in preparation for the 2020 Tokyo Olympics, which was repeated by Mr. Abe to UN Secretary-General António Guterres in a meeting between the two at the G7 Summit in Taormina, Italy, were countered in Cannataci’s letter, which argued that the bill’s vague language and overbroad coverage was beyond what is necessary to fight terrorism, allowing the prosecution of many non-terrorist organizations.

Also regarding that same meeting, Japanese news media misleadingly reported that “Over Cannataci’s claims, Guterres told Abe the special rapporteur acts as an individual, separate from the United Nations, and that the rapporteur’s views do not necessarily reflect the opinion of the world body, according to the ministry”, which suggests the Secretary-General is dismissive of special rapporteur’s authority. However, a press release by the Secretary-General’s own spokesperson stated that “the Secretary-General told the Prime Minister that Special Rapporteurs are experts that are independent and report directly to the Human Rights Council,” which maintains that special rapporteurs have an independent expert and authoritative opinion within the Human Rights Council.

Despite the concerns raised by Cannataci in his letter against the Conspiracy Bill, however, the bill passed the lower house of the Diet on 30 May without sufficient debate on its merits. The bill is now set to be debated in the upper house.

Human Rights Now (HRN), a Tokyo-based international human rights organization, shares the concerns of Special Rapporteur Cannataci’s letter, and on 23 May we submitted a statement criticizing the Conspiracy Bill to the 35th Session of the Human Rights Council in Geneva which is available here: “Japan: Concerns with the “Crime of Preparation for Terrorism and Other Acts” Bill“.

HRN’s statement, like Cannataci’s letter, criticizes in more detail the incompatibility of the Conspiracy Bill with Japan’s duties under its Constitution and international human rights law, and the bill’s risk of arbitrary investigations and potential to arbitrarily target legitimate NGOs and chill their important contributions to civil society due to its vague and over-broad language. Ms. Kazuko Ito of HRN also participated in a press conference on 23 May in which she and other lawyers expressed their concerns with the bill (photo above).

HRN calls on the Abe administration and legislators to drop their support and not approve the bill due to its incompatibility with Japan’s Constitution and international human rights duties as specified by our 23 May statement and Cannataci’s letter. This includes Japan’s duties to ensure people’s freedom of conscience, right to privacy, freedom of assembly, freedom of association and freedom of expression.

Instead Japan should protect against terrorism by implementing the 13 anti-terrorism treaties which Japan has already ratified and existing domestic laws.

We also urge the UN Human Rights Council and relevant UN special
rapporteurs to make and continue their calls on the government to reconsider its policy.

Top Photo: “Lawyer Yuichi Kaido, who is opposed to the controversial conspiracy bill that cleared the Lower House on Tuesday, [spoke] at a news conference earlier in the day [23 May] in the Diet members’ building in Tokyo.” A photo of Joseph Cannataci, Special rapporteur on the right to privacy is on the screen behind him. Source: Satoko Kawasaki | Japan Times