Investigative Report on the Working Conditions in UNIQLO’s Chinese Suppliers

Investigative Report on the Working Conditions in UNIQLO’s Chinese Suppliers 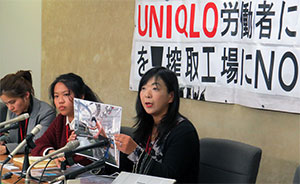 Last year, labor NGO, Students and Scholars Against Corporate Misbehaviour (SACOM) based inHong Kong conducted the research project about manufacturing contract companies of UNIQLO (Pacific Textiles Holding Ltd and Luenthai Holding Ltd ) in China by interviewing labors and investigating the factories. Then they released the report this January.

Representatives of SACOM will be coming to Japan and will hold a press conference and event to raise public awareness about the factories of UNIQLO.

Report can be accessed from here:

Human Rights Now asks the manufacturing companies and Fast Retailing Ltd. for implementation of adequate measurements
based on the finding indicated in this report.
Statement Uniqlo Campaign Statement 2015 (The statement is indicated below as well)
Project Officer of  SACOM who involved in the preparation of this research project will come to Japan in order to inform Japanese consumers about content and findings of the project.

There will be two separate press conferences for media.
The public event will be held for general audiences.

Students & Scholars Against Corporate Misbehaviour (SACOM), conducted a fact finding mission, including under-cover investigation inside the factories, from July to November 2014, in regards to factory workers’ conditions in China. This is was done as a part of the joint investigation project of SACOM, together with Human Rights Now (HRN), a Tokyo-based international human rights NGO, and Labour Action China (LAC).
The investigation focused on two key manufacturing suppliers of the Japanese famous brand UNIQLO, Pacific Textiles Holding Ltd and Dongguang Luenthai Garment Co. Ltd, and the actual situation of the ongoing human rights violations occurring in these China-based factories. Pacific Textiles and Lunethai are both the suppliers of UNIQLO knit fabrics and apparel respectively. They are located in Nansha and Dongguang. The UNIQLO campaign aims at improving the working conditions and ensuring the rights of the workers by unveiling the poor labour conditions in China under the global fast fashion supply chain. It is also with a strong hope to arouse the public awareness on the labour issues in garment industry.

Here are the key issues that should be tackled as soon as possible:
1. Long working hours and low basic salary: a long distance to a decent wage
Pacific and Luenthai offer the basic monthly pay as RMB 1550 and RMB 1310 for the workers, which are only paying the minimum wage level of Guangzhou and Dongguang respectively. On the other hand, the average monthly salary level of workers in Dongguang and Guangzhou are RMB 2,505 and RMB 5,808 respectively in 2013 . Working overtime therefore constitutes an important part of their total amount of the monthly salary. The numbers of overtime working hours are shocking: 156 hours in Pacific and 112 hours in Luenthai . Some workers from Pacific are asked to sign the “voluntary application of overtime work”. The application states that the overtime work is 119.5 hours. This is clear violation of the Chinese Labour Law. Also, in Pacific, the overtime pay is only paid at the ratio of 1.5 times of the basic wage instead of 2 times which is set by laws. In Luenthai, the overtime work record on Sunday and the overtime work exceeds 100 hours are recorded manually on papers instead of the computer system. It can therefore avoid being checked by the social auditors on workers’ working hours.

2. High risk and unsafe working environment
Even with a long operation history, the working conditions in both factories are still dissatisfactory. Workers health and safety are clearly not recognized as the top priority of the factories.
Extreme high temperature in the shop floors, dirty sewage flowing all over the floor, the use of chemical substances and irritating smell, lack of measures such as proper ventilation and accident prevention, and intense working pressure are all posing a great risk on the workers’ health and safety. In Pacific, the investigator witnessed that the accident where worker fall off the stool happen frequently. In the dyeing department of the Pacific, workers have no choice but to deal with extremely hot tank without any measures for accident prevention. Also, the sewage is flowing over the floor in the same factory which could lead to possible electricity leakage. A worker died because of electricity leakage in the finishing floor in July 2014. Harmful chemicals that have irritating smells (PTEG, PT200, etc.) are used, and although the workers are forced to work in such an odour there is no decent ventilations which make them impossible to protect themselves due to the high temperature. No effective measures are implemented in order to solve all those serious issues and to ensure workers’ health and safety.

3. Harsh management style and punishment system
In Pacific, there are 58 types of regulations which are set for punishing workers, 41 of them include fines. Fines are heavily used as a way to control product quality and to manage workers. In reality, different operation floor has its own punishments & rules which are not specifically stipulated in the workers’ regulations. Some regulations are simply written on the whiteboard of the shop floor only. For example, in the knitting department of Pacific, if defected fabrics are knitted or the knitting machine has dirt, the workers’ production bonus bonus will be deducted, which is around RMB 50-100. Luenthai also uses fines as penalty. However, according to the Labour Contract Law, it has not stated that the employers have any given right to punish employees by different means such as using fines.

4. Unrepresented workers
General workers from these two investigated factories have no effective platforms or mechanisms to submit their opinions or make a complaint regarding the different issues in the working environment. The above legal violations and punitive management can be remedied if the general workers can be represented through democratic trade union. In Pacific, the chairperson of the union is the director of administrative department which violates the Measures for the Election of the Trade Union Chairman of an Enterprise article 6, the executives in charge (including deputy executives) and partners of an enterprise and their close relatives, the persons in charge of the human resources department and the foreign employees shall not be the candidates for the labor union chairman of the enterprise. For Luenthai, there is no trade union at the factory level but workers committee group and employee relation department in the factory. However, it is ineffective mean to facilitate workers to express their concerns.
UNIQLO has over 1000 shops around the world and well known for selling high quality products at low prices (consumer-friendly price). Generally, in order to produce low price commodities without compromising quality, labour costs must remain low. Hence it was our concern whether the workers’ rights are protected in such condition. According to the under-cover investigation conducted by SACOM, it was acknowledged that the situation where workers are forced for harsh labour and existing violations of labour regulations, and that of workers’ rights.

We demand the Suppliers:
– To provide at least one rest day every week for workers and limit the maximum overtime work to 36 hours a month in accordance with the Chinese labour Law;
– To pay overtime according to the Chinese Labour Law;
– To reform management style to respect workers’ dignity;
– To ensure workers can have appropriate breaks regularly;
– To provide adequate training concerning the health, safety, and protection of the workers, and ensure the workers to take regular health check ups;
– To take all the necessary measures to ensure workers’ health to be protected from the harmful chemicals used in the production process and make it publicly available the outlined measures as well as the implementation
We demand Fast Retailing:
– To facilitate the suppliers on the improvement in the working conditions by providing adequate resources;
– To comply strictly to their corporate social responsibilities policies;
– To support the set up of fully worker-represented trade union in their supplier by direct and democratic election;
– To maintain transparency to public by disclosing full supply list where their products were manufactured