Report: Hearing on New Bill on Forced Appearances in Pornography 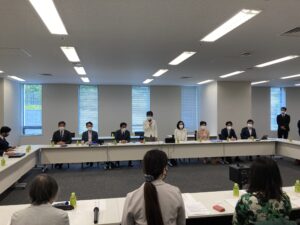 Under these circumstances, Human Rights Now and other victim support groups attended a hearing that was held in the National Diet building on May 9, 2022. Representatives of Human Rights Now submitted a written request on behalf of the organization as well as a joint written request with PAPS and Spring, civil society organizations that have long been supporting victims of forced appearances in pornographic videos and sexual violence.

At the hearing, Human Rights Now and Spring demanded that Diet members pass the bill and take a step forward, and that they take our request seriously. However, some victim support groups expressed the view that they will oppose the bill unless all of their requests are accepted. Overall, the hearing provided opportunities for Diet members and civil society representatives to share the sense of urgency.

Another hearing that was held in the afternoon by the ruling and opposition parties was also attended by a group of pornography companies, and their presence in the room made many civil society representatives feel a strong sense of discomfort. The attendees were made aware of the fact that pornography companies are making huge profits by sexually exploiting women, and there were fierce exchanges with support groups regarding the effectiveness of “self-regulation.”

At both hearings,  the seriousness and complexity of the damage of forced appearances in pornographic videos became clearer than ever. It was also made aware that the self-regulation that the industry has been advancing is not sufficient. In regard to the proposal to prohibit actual sexual intercourse in pornographic videos, Adult Video Human Rights & Ethics Organization, an organization in the pornography industry, stated that if a law prohibiting 18- and 19-year-olds from appearing in such videos is enacted, they will obey it.

The discussions and the submission of written requests at the hearings turned out to be effective. The ruling party said that it will immediately prepare for the revision of the current outline plan based on the result of the hearing and begin a discussion with opposition parties. Human Rights Now urges the ruling and opposition parties to meet the needs of victims and propose an effective bill that can protect them without further increasing the damage among young women.