Event Report: Emergency Rally to Call For a Bill on Forced Appearance in Pornography 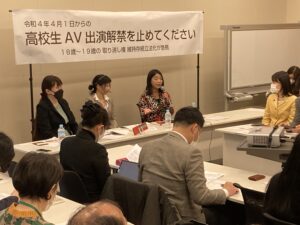 On March 23, 2022, Human Rights Now held an emergency rally in the National Diet building to urge Diet members to draft a bill that allows 18- and 19-year-olds to cancel contracts for appearing in pornographic videos that they signed against their will. The rally was co-hosted by PAPS, a Tokyo-based nonprofit organization that provides support to victims of sexual exploitation. The venue was filled with a large number of Diet members, journalists, and representatives from media outlets and civil society organizations, and was widely covered by the media on that evening and the following day. (List of media coverage)

18- and 19-year-olds had been protected against this exploitation under Article 5 of the Civil Law which allowed them to have the sale of adult videos they have appeared canceled if parental consent was not obtained in their contracts. However, due to the lowering of the legal age of adulthood from 20 to 18, this protection would no longer be available to them starting on April 1, 2022. 18- and 19-year-olds would legally become adults and would not require parental consent when they sign contracts.

In order to prevent further damage to young people, it was necessary to call for a bill that allows 18- and 19-year-olds to cancel contracts for appearing in adult videos that they signed against their will.

The emergency rally featured three speakers: Kazuna Kanajiri, Chief Director at PAPS, Kurumin Aroma, a human rights advocate/activist, and Kazuko Ito, a human rights lawyer and Vice Chief Director at Human Rights Now. The speakers informed participants of the actual damage of forced appearances in adult pornographic and its impacts on young women from the standpoint of support groups, human rights organizations, and lawyers. The difficulty of escaping from the hands of malicious agencies and specific measures to prevent further damage to young people were also shared from the standpoint of victims.

While the speakers called for an inclusive bill,  some Diet members also expressed concerns over the current situation in which inexperienced and distressed young women are deceived by professional solicitors and suffer from sexual violence and exploitation.