The Vienna Conference on Protecting Civilians in Urban Warfare was held by the government of Austria on the 1st and 2nd of October 2019. The purpose of the conference was to discuss the issue of explosive weapon in populated areas (EWIPA)1 including laws and good practices for militaries in order to mitigate injuries and damage to civilians.

The International Committee of the Red Cross (ICRC) and the UN Secretary General (UNSG) Antonio Guttéres have been urging states to end the use of the EWIPA in conflicts. The participants discussed the issue enthusiastically throughout the conference, aiming to promote the adoption of a political declaration2 on the EWIPA proposed by the UNSG, which gave historical momentum to the adoption.

Not only delegates from states, but also international and civil society organisations attended the conference, with 133 states and over 60 non-governmental organisations (NGOs) participating. Human Rights Now (HRN) joined the conference as a member of the International Network on Explosive Weapons (INEW),3 which has been advocating for the abolition of the use of EWIPA and further approaches to protecting civilians in warfare.

Compared with the Vienna Conference on the Humanitarian Impact of Nuclear Weapons in December 2014, there were 25 fewer states participating this time; yet the scale might be still big enough, considering the fact that the 74th session of the UN General Assembly was being held in New York at the same time. In today’s conflicts, over 90% of the victims are civilians; and the impacts of EWIPA are vast and include houses and public facilities such as schools, universities, hospitals, sanctuaries, and markets. Such impacts cause forced migration and protracted reconstruction. In 2018, a large number of people became victims in countries such as Syria, Afghanistan, Yemen, Iraq, and Pakistan. Looking at Aleppo, Syria, in particular, 60% of medical facilities and 75% of educational institutions were damaged or destroyed as well as 60% of housing. It is estimated that reconstruction would take six years and would cost $1.12 billion dollars.

In the opening session, after an introduction by Alexander Schallenberg, the Federal Minister for Europe, Integration and Foreign Affairs of Austria, which organised the conference, Izumi Nakamitsu, Under-Secretary-General of the UN and High Representative for Disarmament Affairs, gave the opening speech and referred to the complexity of the actors related to EWIPA, including states, terrorists and NGOs. She also stated that advanced technologies like drones have legal norms, and other technologies are also capable of solving situations in areas of armed conflict.

In addition, she claimed that if a state is likely to violate International Humanitarian Law (IHL), arms exports to it should be banned; and she stressed the importance of gender considerations in the impact of war, as well as the influence of civil society on disarmament in multinational dialogue. 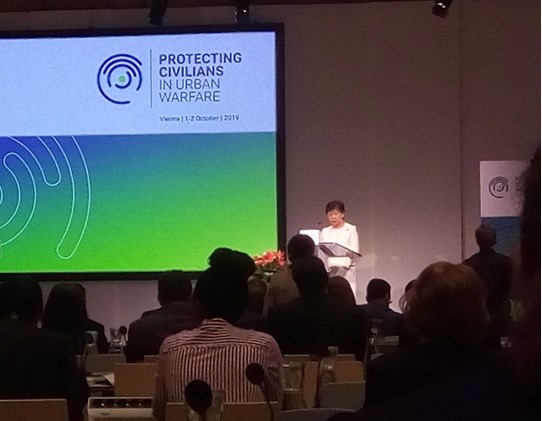 Izumi Nakamitsu providing the opening speech for the conference.

Some experts provided a presentation during the conference. Roos Boer, who is the programme leader of the Humanitarian Disarmament team of the Dutch Peace Organisation (PAX), simulated impacts using the city of Vienna as an example to make the attendees realise the threat of EWIPA more practically.

Alma Taslidžan Al-Osta, a Regional Advocacy and Communication Manager for Humanity and Inclusion then spoke not only about the physical damage, but also the emotional and psychosocial impacts of EWIPA, particularly of children during their development. Her talk allowed all participants to concentrate fully on the conference as a whole and pay attention to what is really happening in warfare, something often absent in such a big conference at the diplomatic level. It seemed the most emotional and vulnerable, but also the toughest and the most humane moment throughout the conference.

At the end of the conference, several states, particularly Germany, Norway, France, Switzerland, Bangladesh, Uruguay, and El Salvador, which have been leading the disarmament movement globally, presented their strong support for the political declaration on EWIPA. The lists of states supporting a political declaration on explosive weapons and states attending the conference, respectively, are as follow.

Following the remarks of states, one of the NGOs, Women’s Institute for Alternative Development, offered a critical perspective expressing the imperative of mentioning women’s roles and their participation in the political declaration. Moreover, the ICRC claimed that a political declaration can be a very strong tool to change the status-quo and the face of urban wars today, but it should also contribute other values.

Human Rights Watch (HRW) also provided a presentation regarding political declarations; and Bonnie Docherty, who is a senior researcher in the Arms Division of HRW, played a huge role in helping the participants deepen their knowledge of political declarations, which is one of the aims of the conference. In addition to states, civil society actors emphasised the imperative on international society to make further efforts towards stopping the use of the EWIPA in the coming conference in Geneva.

In the conference’s final remarks, Mme. Nakamitsu pointed out that data-collection regarding EWIPA is challenging from the UN’s perspective and stated that

Political declarations are a hugely useful framework; yet we need to include more actors such as diplomats, policymakers, lawyers, and humanitarian workers, as many as possible, regardless of their background for risk reduction. If we will, we can do better. Not only states, but also the efforts and the outcomes of civil society groups are expected to play a crucial role in the decrease and abolition of EWIPA. Although such actors face high risk in being involved in warfare, it can be their strength to be in the position in which they can understand the situation better. We are now at the next level to discuss the use of the framework and pragmatic measures.

The conference was concluded by Schallenberg, who remarked that data-sharing and good practices among stakeholders, including states and civil society, are crucial to tackling issues of EWIPA, and the principles of IHL should be fully respected.

The procedures for agreement on the international political declaration will be further discussed in Geneva in November.

Explosive weapons are conventional weapons that detonate, affecting an area with blast and fragmentation damage. There are many types such as grenades, mortar bombs, artillery shells, aircraft bombs and missiles, as well as improvised explosive devices (IEDs). Due to the scale of their explosive force, inaccuracy, or the use of multiple warheads, EWIPA, explosive weapons in populated areas, cause widespread damage.

A political declaration commits states to political goals and standards of conduct and clarifies the application of law and/or establishes progressive standards. While it is a political commitment, it is not legally binding. Political declarations have four main roles: to identify and codify areas of agreement; to provide greater flexibility for adaption to national circumstances; to help balance the interests of stakeholders; and to contribute to the dynamic development of international law.

– Recognition of immediate and reverberating effects, and

The effects of a political declaration depend on the specific commitments that are chosen and followed-through by endorsing countries, international organisations, and civil society groups. In fact, six countries updated their military manuals or policies within two years, whilst other states ordered their armed forces to evacuate schools.

Looking internationally, ICRC provides technical advice and has created a handbook on implementation of the Safe Schools Declaration. In addition, UN DPKO banned the use of schools by peacekeepers. Furthermore, the UNSG and UNHCR have called for more states to endorse the declaration. Endorsing states have also held follow-up meetings. As political declarations are widely accepted and have clear and strong standards, they can effectively reduce humanitarian harms and represent a critical step towards addressing the civilian consequences of the use of EWIPA with wide area effects.

The International Network on Explosive Weapons (INEW) is an NGO partnership calling for immediate action to prevent human suffering from the use of EWIPA. It consists of over 40 organizations from across 25 countries. The steering committee is comprised of AOAV, Article 36, CIVIC, Humanity and Inclusion (HI), Human Rights Watch, PAX, Norwegian People’s Aid, Oxfam, Reaching Critical Will, Save the Children and SEHLAC.