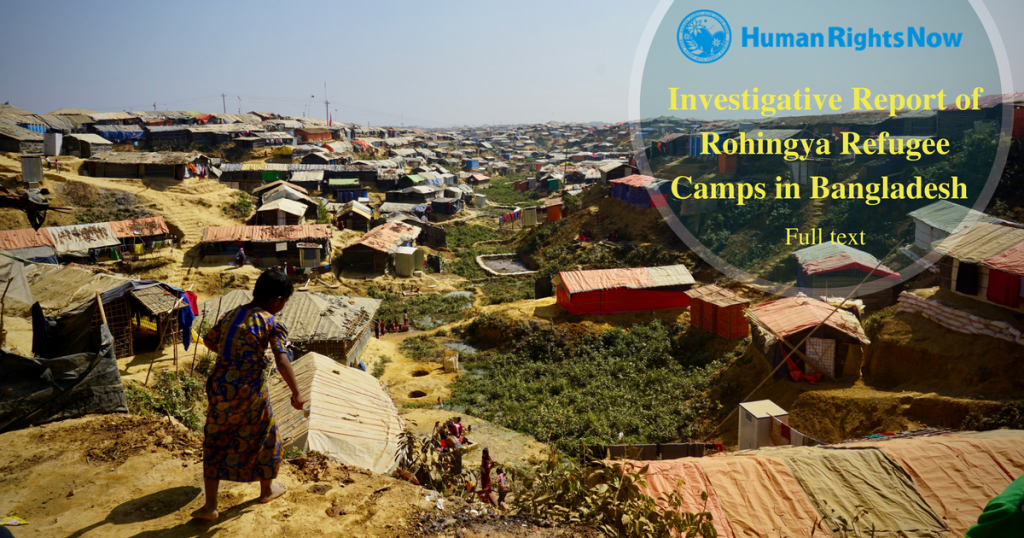 The English version can be found here (PDF): Investigative Report of Rohingya Refugee Camps in Bangladesh

Hundreds of thousands of Rohingya have been displaced from Myanmar in the past few years. Their flight is a response to widespread violence by Myanmar security forces, including mass killings, forced disappearances, village burnings, widespread beatings and torture, rape and other forms of sexual violence against women and girls, and deprivation of access to food and other means of livelihood.

The HRN team interviewed Rohingya refugees, aid workers, local Bangladeshis, and others. The mission confirmed widespread human rights violations against the Rohingya in Myanmar, as well as persistent obstacles to realizing rights in the refugee camps in Bangladesh. As the situation in Myanmar is ongoing, and HRN’s field mission was limited to a few days, the report should not be viewed as a comprehensive account of the Rohingya situation, but rather a small contribution to the increasing evidence of widespread and systematic violence against the Rohingya in Myanmar.

First, the interviews with the Rohingya refugees strengthened the likelihood that the Myanmar government is perpetrating or at least complicit in crimes against humanity and genocide, in contravention to international criminal law. The interviews, which recount personal experiences with targeted violence such as being shot at, witnessing the murder of loved ones, and being raped, when considered against the background of several reports highlighting mass violence against the Rohingya, supports a finding of widespread and systematic violence against the Rohingya, as well as an “intent to destroy” an ethnic group, under the definitions of “crimes against humanity” and “genocide,” respectively.

Third, HRN’s visits to the refugee camps and interviews with refugees and aid personnel revealed that the Rohingya continue to face deprivation of their human rights after they flee from Myanmar. These include violations of the right to physical and mental health, the right to an adequate standard of living, and certain children’s rights. HRN is concerned about serious health and sanitation issues due to crowded camps with unclean resources (e.g. non-potable water), limited access to medical services, limited supply of clothing, shelter, and food, limited opportunities to earn a livelihood and receive an education, and risks from natural disasters. The conditions in the camps detract from the Rohingya refugees’ full enjoyment of their human rights.

Fourth, HRN is concerned that the ongoing discussion between the Bangladesh and Myanmar governments regarding the return of Rohingya refugees will undermine the principle of non-refoulement, embodied under international refugee law. Without a comprehensive repatriation solution that addresses issues such as the citizenship of the Rohingya, and the availability of long-term housing, HRN is worried that the Bangladesh and Myanmar governments cannot ensure the voluntary and safe return of the Rohingya in accordance with non-refoulement.

HRN urges the Myanmar military and civilian authorities, the UN Security Council, and the international community to take steps to hold accountable those actors responsible for the systematic and gross violations of human rights and humanitarian law directed against the Rohingya.

Specifically, the Myanmar military and civilian authorities should immediately cease military operations and human rights abuses in the Rakhine State; conduct independent investigations of the alleged crimes and hold accountable all actors responsible for those actions; provide unfettered access to all international organizations and officers to investigate the issue, including allowing the Human Rights Council to send a fact-finding mission into Myanmar; and work alongside international actors to ensure the safe and voluntary return of refugees to Myanmar, including creating a framework to restore or provide compensation for stolen and destroyed property of the Rohingya, and give citizenship to the Rohingya.

Additionally, HRN recommends that the UN Security Council refer the Rohingya situation to the International Criminal Court; impose sanctions in the form of financial sanctions and arms embargo against Myanmar to pressure Myanmar to address the issue; and explicitly call on Myanmar to halt the persecution of the Rohingya.

Finally, the international community should dedicate greater resources to provide for the well-being of the displaced Rohingya, as well as encourage the governments of Myanmar and Bangladesh to ensure that the repatriation scheme of the Rohingya abides by basic standards of human rights.

The international community must work together to prevent further persecution of the Rohingya people, and to rehabilitate those who have already been touched by violence.