Regarding the UN Negotiating Committee on Nuclear Weapons Convention 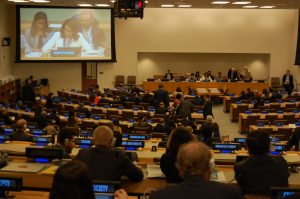 Due to the resolution adopted at General Assembly (A/RES/71/258), the first negotiating committee for the Nuclear Weapons Convention was held from March 27th to 31th at the United Nation Headquarters in New York. The draft of the treaty (A/CONF.229/2017/CRP.1) was announced by the chair of the negotiating committee, Mr. White (Costa Rica) on May 22th. The purpose of the treaty is a complete prohibition on the production or possession of nuclear weapons. The second negotiating committee started on June 15th. During the three weeks the committee met (June 15th to July 7th), there were meetings almost every day, in the morning and the afternoon. Ambassadors from every country and the International Committee of the Red Cross (ICRC) were present, as well as members of civil society who spoke and discussed the treaty. Japanese Atomic bombs victims also participated in and spoke at the meeting.

The International Campaign to Abolish Nuclear Weapons (ICAN) took the lead for related events, such as lobbying and activism campaigns. Atomic bomb victims from Hiroshima and Nagasaki and victims from the nuclear tests in Australia and Tahiti spoke about their experiences. Experts from many fields also shared their research reports relating to the treaty.

The draft of the treaty is composed of six sections. 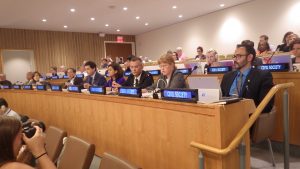 As an example, ICAN and members of civil society insisted that there should be a clearer description of the prohibition on financial support for nuclear weapons in the “prohibition of assistance” section, as well as the suggestion that in addition to “transferring” nuclear weapons, “transit” of nuclear weapons should also be prohibited. There was also a suggestion that the phrase “Use of nuclear energy for peaceful purposes” in the Preamble should be deleted because “use for peaceful purposes” is not related to the main point of the treaty. Some participants insisted that not only the “use” of nuclear weapons, but also “threatening other countries” with the presence of nuclear weapons should be strictly prohibited. Also, being discussed were problems such as if countries should be allowed to withdraw from the from the treaty. Further, in the preamble of the second draft (clause 7 and clause 22), “effect to indigenous people” and “reinforcement and support for women’s participation in the process of abolishing nuclear weapons” were added, which were improvements from the original version. 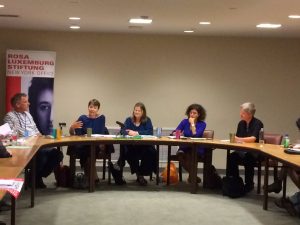 Starting from the second week of the committee, taking pictures and videos was not allowed, as well as reporting the content of the committee through Facebook and Twitter. The content of the meeting was kept secret, but civil society organizations were still allowed to join and voice their opinions. At the first main meeting in March, media reported that countries that possess nuclear weapons such as the United States, Britain, France, Russia, China, and the only country that has suffered from atomic bombing, Japan, refused to join the committee. During the second meeting, their seats were still empty. ICAN is still asking representatives of these countries to join the committee. Even without these nations, there were enough member states who support the treaty that it was approved on July 7th. However, every country needs to participate to rid the world of nuclear weapons.

The Second Draft of the Treaty