Home > News > Statement > A statement demanding the cessation of trade with companies engaged in illegal logging in the State of Sarawak, Malaysia

A statement demanding the cessation of trade with companies engaged in illegal logging in the State of Sarawak, Malaysia 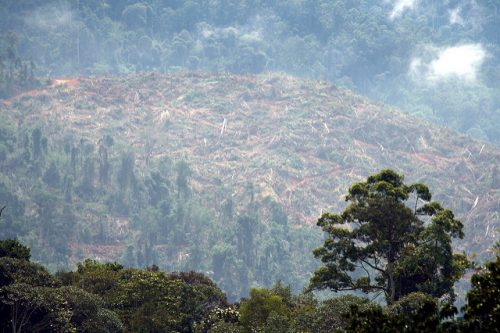 A statement demanding the cessation of trade with companies engaged in illegal logging in the State of Sarawak, Malaysia

Human Rights Now (HRN), a Tokyo-based international human rights NGO, expresses its deep concern that the illegal logging of forests in the Malaysian State of Sarawak gravely infringes upon the human rights of the indigenous people. HRN also condemns the Japanese companies that have continued to import a substantial portion of Sarawak timber regardless of the existing human rights concerns.
Recently, the Malaysian government and the government of Sarawak have started to seriously address the issue of illegal logging; thus, now is the best time for Japanese companies to cease trade with companies engaged in illegal logging and to eradicate the import of illegally logged timber. Moreover, the Japanese government must promptly revise relevant Japanese laws and regulations in order to strengthen its control over the importation of illegal timber.

2. The situation of illegal logging in Sarawak and the recent shift of the state government’s policy
For a long time in Sarawak, many NGOs have reported on the illegal logging practices associated with the collusive relationship between the state government and major logging companies. Coupled with the fact that Sarawak land laws do not properly recognize the land rights of the indigenous people, the timber licenses have been granted in such a way as to ignore the indigenous people’s land rights, resulting in numerous disputes and lawsuits. Additionally, illegal logging is observed outside the concession areas granted by the timber licenses.
Even the Chief Minister has criticized this situation. Last year, the Chief Minister in Sarawak stepped down and Adenan Satem succeeded as the new Chief Minister. Since taking office, Satem has announced a policy to seriously address the illegal logging issue. Satem directly warned the key senior officials of the “Big Six” logging companies in Sarawak – namely, WTK Holdings Sdn Bhd, KTS Holdings Sdn Bhd, Rimbunan Hijau Forest Corporation Sdn Bhd, Tan Ann Group, Samling and Shin Yang Groups – that they, including their sub-contractors and other relevant parties, must not engage in illegal logging. He stated that the timber licenses have been used illegally to log timber outside the companies’ concession areas . Further, the government has suspended issuing new timber licenses until the illegal logging activities are addressed .
From now on, the measures taken by the Malaysian government and the Sarawak government’s shift in policy are expected to attract attention to the issue of illegal logging in Sarawak. As a main importer of Sarawak timber, Japan may soon be requested to issue a response to these changes.

3. The promotion of illegal logging by the lax regulations in Japan
As the largest importing country of Sarawak timber and timber products, Japan is criticized for its lax regulations regarding illegal timber, which leads to the promotion of illegal logging in Sarawak .
The laws and regulations in Japan concerning illegal timber are the Act on Promoting Green Purchasing and “the Basic Policy on Promoting Green Purchasing ” based on the Act. This latter policy requires the public sector to procure only legally verified wood. The Forestry Agency of Japan has developed a guideline to determine which timber is considered legal. Unfortunately, there is still no law or regulation that prohibits the private sector from importing illegally logged timber or any criminal penalty against violators.
The Goho-wood system, established based on the guideline of the Forestry Agency, is a scheme in which the private sector voluntarily participates. For proof of legality, this system requires either a forest certification or verification by a logging company that an industry association approves. However, this verification relies on certified documents issued by the Sarawak side, which is problematic because of the reported collusive relationship between the state government and logging companies. Furthermore, the Goho-wood system, does not required any further review. Thus, this system has not been able to eliminate illegally logged timber in Sarawak .
These inadequate Japanese regulations against illegally logged timber and the Japanese importing companies that easily rely their inadequacies are promoting the problem of illegal logging in Sarawak.

４．Conclusion
Considering the above situation, Human Rights Now demands that Japanese companies immediately cease the import of timber and timber products from the logging companies engaged in illegal logging in Sarawak. In addition, Human Rights Now insists that the Japanese companies do not resume trade with such logging companies until they obtain an internationally recognized forest certification such as certification by the Forest Stewardship Council (FSC). Moreover, Human Rights Now calls on the Japanese government to revise the relevant laws and regulations to completely ban the import of illegal timber and include criminal penalties for violators.