The human rights situation after the nuclear disaster in Fukushima, Japan 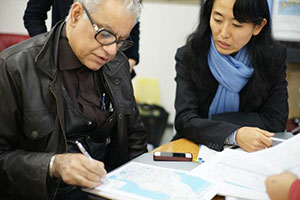 The nuclear accident at the Fukushima-Dai-ichi Nuclear Power Station, Northeast Japan, on March 11, 2011, released huge amount of radioactive material, which is estimated at 168 times of that released by the atomic bomb in Hiroshima. The Japanese government’s policies towards the affected population remains insufficient, and there are serious concerns over the affected population’s rights to health, especially those of the most vulnerable such as children, pregnant women, the poor, the elderly, and the mentally-ill. Alarmingly, the government has been disregarding most of the recommendations made by UN Special Rapporteur Anand Grover in his May 2013 report (made following his mission to Japan in November 2012). The Japanese government has not taken into consideration the health implications of low-level radiation exposure. Human Rights Now is the only human rights NGO actively investigating and engaging in advocacy on this human rights issue in Japan. Please see our reports, investigations and policy proposals below to learn more about our activities and recommendations so far.

Report and Request to the United Nation

Archives – after the disaster