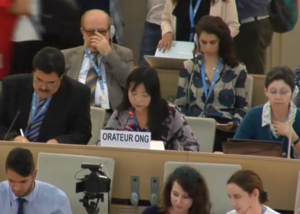 Last Monday, June 12, Secretary General of Human Rights Now (HRN) Kazuko Ito gave an oral statement at the 35th session of the UN Human Rights Council held in Geneva, Switzerland, in a dialog meeting in which UN Special Rapporteur David Kaye presented his report on freedom of expression in Japan.

The comments welcomed Mr. Kaye’s report, which recommended that the Japanese government review its broadcasting laws to secure the independence of the media. Unfortunately, the Japanese government referred to the report dismissively as the Special Rapporteur’s “personal opinion”. HRN thus strongly urged the government respect the voices of special rapporteurs, take the findings of Mr. Kaye’s report seriously, and take concrete measures to implement its recommendations.

Human Rights Now, on behalf of broader civil society in Japan, welcomes the report
of UN Special Rapporteur David Kaye on the freedom of expression in Japan.

We share the serious concern with threats against media independence highlighted
in his report. In recent years, the Japanese government has suggested use
of the Broadcast Act to revoke broadcast licenses based on the content of reporting,
which has caused an enormously negative impact.

Unfortunately, the government has dismissed this report claiming that interviews
it is based on are unverified and hearsay. However, this ignores the possible harm
journalists face to publicly speak about internal matters.

We strongly urge the Japanese government to respect the voices of UN special rapportuers and take concrete steps to implement the recommendations made by Mr. Kaye.