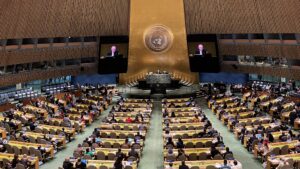 The General Assembly electing members to the Human Rights Council

From September to December in New York City, state leaders, ambassadors, private sector stakeholders, and civil society activists flock to the United Nations (UN) for the new regular session of the United Nations General Assembly (UNGA). This year’s session opened in-person on September 13, 2022, the first session in-person since the outbreak of the Covid-19 pandemic during the 74th session, marking the official start of the 77th session of the General Assembly.

Though NGOs were banned from entering the UN Headquarters between September 13 and September 30 during the high-level General Debate, when Heads of State and Government come together to discuss global issues and brainstorm global solutions, Human Rights Now (HRN) remained active by attending UNGA77-aligned side events held at the peripheries of the UN Headquarters. The topics of these side events ranged from a discussion with Indigenous land defenders on climate change; to a film screening on Afghan women, human rights, and the arts; to a debate on the causes of and solutions to the Russia/Ukraine war. For highlights of the UNGA77-aligned side events HRN attended in September, check out our Twitter thread here.

Starting on October 1, 2022, NGOs including HRN were allowed back inside the UN Headquarters to observe and participate in activities of the UNGA. This past month, HRN attended more than 10 Third Committee Plenary Meetings featuring UN Special Rapporteurs, Working Group Chairs, and Independent Experts, in addition to over 15 total side events pertaining to First and Third Committee activities. Daily updates including summaries, quotes, and pictures from these Committee Meetings and side events were posted to the HRN-NY’s Twitter each day, which can be found here (be sure to follow @HRNow_NY on Twitter for more daily updates on HRN’s activities during UNGA77 through November and December). The following is a summarized report of the First Committee and Third Committee Meetings and side events that HRN attended during the month of October at the UN Headquarters.

Why did HRN attend these specific Committee Meetings and side events? 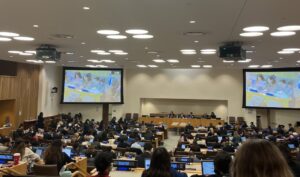 At the Third Committee Meeting addressing Agenda Item 26: Advancement of Women, the Deputy Executive Director of UN Women, Ms. Asa Regner; the Chair on Convention on the Elimination of All Forms of Discrimination Against Women, Ms. Gladys Acosta Vargas; and the Chair of the Working Group on the Discrimination Against Women and Girls, Ms. Dorothy Estrada-Tanck, presented challenges to the human rights of women and girls, including the human trafficking of women and girls, especially in conflict zones; the gender pay gap in developed and developing countries; the threats to women’s reproductive and sexual rights; the lack of protection by state mechanisms for Indigenous women and girls; the rise of authoritarian and anti-democratic actors on the livelihoods of women and girls, especially on human rights defenders; and the inclusion of women and girls in addressing climate change.

The Third Committee Meetings addressing Agenda Item 68: Human Rights opened with a dialogue with the Office of the High Commissioner on Human Rights. Ambassador Csaba Korosi, President of UNGA77, reminded the Third Committee at this Meeting that, “All human beings are born free & equal, yet we cannot state this is today’s reality… This committee’s role is to ensure the rights of all people are respected, regardless of race, gender identity, migration status, religion, ethnicity, etc.” Other Third Committee Meetings addressing Agenda Item 68: Human Rights featured the UN Special Rapporteur on Human Rights and the Environment, David Boyd, who called for the right to a clean, healthy, and sustainable environment to be recognized as a global human right rather than languishing as a second-class human right; the UN Special Rapporteur on Freedom of Religion or Belief, Nazila Ghanea, whose report focused on understanding Indigenous people and their beliefs; and the UN Special Rapporteur on Human Rights in Myanmar, Tom Andrews, who urged for the Security Council to pass an international arms embargo and bring the junta to the International Criminal Court, and for Member States to deny the junta political recognition and increase humanitarian funding to Myanmar and its neighboring countries.

Side event: The Situation of Uyghurs in Xinjiang

While NGOs are only allowed to observe Committee Meetings, side events provide an opportunity for NGOs like HRN to informally meet with UN Special Rapporteurs, Working Group Chairs, and Independent Experts, and have an active voice in discussing human rights issues with them. HRN made a particular effort to attend Third Committee side events related to human rights work in the context of Asia, including the human rights situations for the Uyghurs and other Turkic Muslim minorities in Xinjiang, China, and the Rohingya in Myanmar.

At a meeting organized by the NGO Committee on Human Rights with the UN Office of Disarmament Affairs and the UN Office of the High Commissioner for Human Rights, Uyghur activist Omer Kanat discussed China’s persecution and genocide of Uyghur people in Xinjiang. Kanat has released over 90 reports on the situation of Uyghurs in China since the persecution against Uyghurs started in 2004 through to the present day, where there is now “an ongoing genocide in East Turkistan against Uyghur people.” Though the vast majority of countries refuse to take a stand against China in support of the Uyghur people, the fact that 23 countries, including the US, Turkey, and Canada, sponsored an event on “The Situation of the Uyghurs and other Turkic Muslim Minorities in Xinjiang” demonstrates a very important shift towards holding China accountable for its human rights violations and ending abuse against Uyghurs. At this side event, Jewher Ilham and Ziba Murat, two Uyghur activists whose parents are both locked up by the Chinese government for the crime of being Uyghur, discussed the lack of freedom of expression and religion in China, and the human rights violations faced by Uyghurs on the daily, including torture, forced sterilization, forced disappearances, and arbitrary imprisonment. 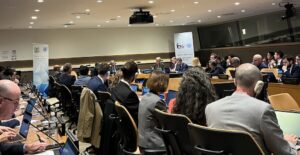 An Informal Discussion with Judge Joan Donoghue, President of the ICJ on Multilateralism and International Law

While the human rights situation of the Uyghurs in Xinjiang is finally advancing to the forefront of many states’ human rights agendas, UN Special Rapporteur Tom Andrews expressed in his Third Committee presentation that the human rights situation of the Rohingya in Myanmar has unfortunately faded into the background for many states, even in the midst of further deteriorating conditions. At the meeting organized by the NGO Committee on Human Rights, Rohingya activist and refugee student Par Tha Hniang described how religious minorities including the Rohingya continue to face human rights violations by the Myanmar junta, including the deliberate destruction of sacred religious sites and structures “so they can destroy the strength we have left.” Shifting from discussing the crises that currently exist in Myanmar to the solutions, the side event organized by the Global Center for the Responsibility to Protect and Global Justice Center, “The UN’s New Agenda for Peace and the Situation in Myanmar: Examining Priorities in Practice,” discussed concrete actions that the international community and the UN should implement to effectively end the human rights abuses in Myanmar. For example, Founder of Women’s Peace Network Wai Wai Nu expressed confidence that the UN Security Council can bring peace to Myanmar and urged the Council to hold the junta accountable so crimes without humanity do not continue with impunity; Director of Gender Equality Network May Sabe Phyu emphasized the importance of putting the needs of women and girls at the center of all security policy; and President of the Burmese Rohingya Organization Tun Khin called for justice for victims to be included in conversations related to accountability for war crimes committed by the junta.

In addition to the aforementioned actions, HRN delivered an oral statement on Myanmar in September at the 51st Session of the Human Rights Council (HRC) in Geneva, in which we called for states to support a binding arms embargo against Myanmar’s military and due diligence requirements on their companies that may be supporting abuses there (read and listen to the full oral statement here). HRN’s engagement with the HRC continued in NY, where HRN observed the election of Member States to the HRC for 2023, the 14 new members being: Algeria, Bangladesh, Belgium, Chile, Costa Rica, Georgia, Germany, Kyrgyzstan, the Maldives, Morocco, Romania, South Africa, Sudan, and Vietnam. HRN was also honored to meet the current HRC President, Ambassador Federico Villegas of Argentina, alongside other NGOs and civil society organizations, to ask questions about the current functioning and activities of the HRC. Recognizing the crucial role that NGOs like HRN play in pushing the UN to recognize and address human rights violations, President Villegas stated, “Everyone needs to feel ownership of the HRC, because what we do at the HRC touches indirectly or directly the lives of every person in the world.” 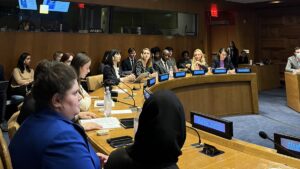 Because nuclear disarmament is essential to effectively uphold human rights law and international humanitarian law, HRN also attended First Committee side events related to disarmament. These side events ranged from meeting with H.E. Leslie Norton, Ambassador of Canada to the UN in Geneva, for a civil society dialogue on how to push states to adopt more progressive disarmament agendas, to a day-long conference organized by the UN Institute for Disarmament Research at the Ford Foundation to discuss how artificial intelligence can be used to promote disarmament, peace, and human rights. Nuclear disarmament youth activists, including those at the UN Office for Disarmament Affairs’ #Leaders4Tomorrow side event, in addition to state actors and survivors of nuclear testing, including both H.E. Ambassador Azril Bin Abd Aziz of Malaysia and Mary Dickson of Nevada Test Site Downwinder at the Nuclear Age Peace Foundation’s side event, all conclusively agreed that the only way to move forward in a world that respects human rights and international humanitarian law is to completely eliminate nuclear weapons. Universal adoption of the Treaty on the Prohibition of Nuclear Weapons (TPNW) can accomplish this, and many states not currently party to the Treaty made indications during First Committee Meetings that the TPNW is a legitimate consideration, which is a very good sign.