HRN has signed an open letter calling on President Biden to help bring an end to Israel’s institutionalized domination and oppression of the Palestinian people and protect their fundamental human rights.

The full text of the letter is below. More information and the full list of 682 signatories is available on this website: https://nowisthetimecoalition.com/ 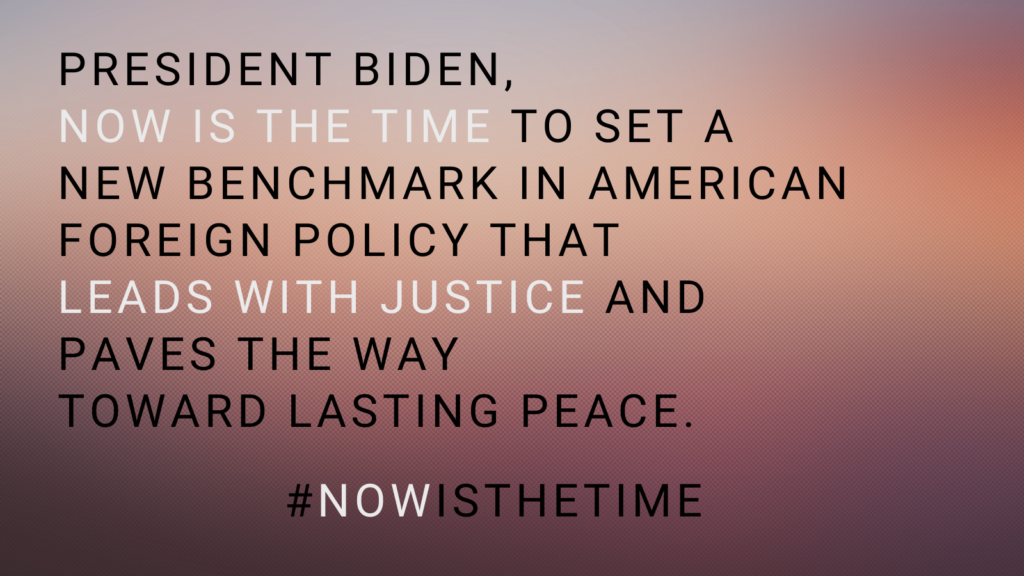 We, the undersigned global coalition of leaders – from civil society to business, the arts and faith communities, politics and Nobel laureates – call for U.S. leadership to take action to help bring an end to Israel’s institutionalized domination and oppression of the Palestinian people and protect their fundamental human rights. A sustainable and just peace – for all people – will remain elusive if U.S. policy holds to a political status quo devoid of justice and accountability.

Your administration has committed to a foreign policy “centered on the defense of democracy and the protection of human rights.” More recently, you stated, “I believe the Palestinians and Israelis equally deserve to live safely and securely, and enjoy equal measures of freedom, prosperity, and democracy.” For Palestinians, the space between these statements and their daily lives could not be wider.

Even after a formal ceasefire, Israeli police and settler violence against Palestinians continues. The forced dispossession of Palestinians across the occupied West Bank, including families living in the East Jerusalem neighborhoods of Sheikh Jarrah and Silwan, and aggressive actions by Israeli forces against peaceful protesters and worshippers at Al-Aqsa Mosque, are the latest evidence of a separate and unequal governing system. These policies unravel the social fabric of communities and undermine any progress toward a democratic, just and peaceful future. The logic driving them has led to the recent displacement of 72,000 Palestinians in Gaza who must also survive the ongoing humanitarian crisis caused by a 14-year blockade.

Moving forward, the United States must address the root causes of the violence which successive administrations have neglected. Your administration must apply concerted diplomatic pressure to help end the ever-expanding discrimination and systemic oppression and ensure accountability for Israeli authorities that violate Palestinian rights.

Only a consistent application of a rights-centered foreign policy can signal to Israel’s leaders that violations of international law will no longer go unaccounted for. Mr. President, now is the time to set a new benchmark in American foreign policy that leads with justice and paves the way toward lasting peace.