HRN has released the English translation of our Joint Statement with Japan Uyghur Association “Japanese Companies’ Links to Forced Labor in Xinjiang Uyghur Autonomous Region and Corporate Responsibility”. The statement provides the results of our survey of Japanese companies previously linked to businesses in China employing forced labor of Uyghurs and other Turkic Muslims in a past report and our analysis of their responses.

You can read the text of the statement below, and it is also available in PDF format from the following link: Japanese Companies’ Links to Forced Labor in XUAR China and Corporate Responsibility.pdf

We are greatly concerned that Japanese companies have not yet taken sufficient measures to completely eliminate the possibility that they are involved through their supply chains in the Chinese government’s mass detention, abuse, forced labor, and destruction of Muslim culture in Xinjiang Uyghur Autonomous Region. It has also been revealed that under the Chinese government’s “Strike Hard Campaign against Violent Extremism,” there are serious and widespread abuses and violations of basic human rights such as freedom of expression, association and privacy and freedom from torture and inhumane treatment, forced labor, unfair trial, discrimination, and violations of minority rights.

So far, Patagonia,[5] H&M[6] and IKEA[7] have announced that they will stop sourcing materials and purchasing cotton from Xinjiang in their supply chains. The Better Cotton Initiative (BCI), an international NGO promoting sustainable cotton cultivation, has announced that it will suspend licensing products from the area in October 2020 due to concerns over the human rights violations.[8], [9]

The governments of various countries have also taken tough measures against the Chinese government and companies, imposing a series of sanctions since 2020 in relation to this matter as follows.

Also, for example, in January 2021 SKL Kommentus Inköpscentral, which is run by the Council of Municipalities in Sweden and conducts public procurement consulting and social audits for municipalities, sent a letter to request that public procurement suppliers, including their business partners and factories, conduct human rights due diligence in Xinjiang and report them. Also, they asked the suppliers to cut off transactions unless there is credible evidence that they are not complicit in forced labor and can conclude that they do not have a connection to forced labor. If any of the following are identified: 1) manufacturers with production facilities in Xinjiang; 2) manufacturers that employ Xinjiang workers dispatched by the government to work outside of Xinjiang; or 3) manufacturers that procure fabrics, yarns, cotton, or other materials produced in Xinjiang, it is assumed that there is a connection to forced labor. [16]

In addition, on 29 March 2021, a statement was issued by several UN experts, including the UN Working Group on Business and Human Rights, expressing deep concern over the detention and forced labor in Xinjiang Uyghur Autonomous Region.[17] Dante Pesce, a member of the Working Group, stated “Uyghur workers have allegedly been forcibly employed in low-skilled, labor-intensive industries, such as agribusiness, textile and garment, automotive and technological sectors” and while the Government of China justifies its actions relating to the treatment of Uyghurs by combatting terrorism and violent extremism, poverty alleviation or development purposes, we nevertheless respectfully urge the Government to immediately cease any such measures that are not fully compliant with international law, norms and standards relating to human rights, including the rights of minorities.

Also, Surya Deva, Vice Chairperson of the Working Group stated that companies must be proactive in their efforts to conduct due diligence as many businesses are also implicated in these allegations, either directly or through their supply chains. Businesses must not turn a blind eye to this and must conduct meaningful human rights due diligence in line with the UN Guiding Principles to identify, prevent, mitigate and account for human rights abuses caused, contributed to or directly linked to their operations, products or services in Xinjiang and in other Chinese provinces.

The reason why governments, companies and organizations are taking such severe measures such as sanctions and suspension of transactions is that it is already clear that forced labor is widespread in Xinjiang Uyghur Autonomous Region, but it cannot be easily recognized by third party audits with available evidence. In light of this fact, it is recognized that having economic ties with the region itself is a serious human rights risk. In order for companies to fulfill their responsibility to respect human rights, they should cease trading as long as there is such a link to the companies’ supply chains and value chains and forced labor is undeniable.

As a result, as shown below, at least based on the information currently available, links between Japanese companies and organizations and forced labor in Xinjiang Uyghur Autonomous Region are strongly suspected, and the companies must take serious accountability for them in this regard. In October 2020, the Japanese government announced the “Action Plan on Business and Human Rights (2020-2025)”[18] and set “efforts in domestic and international supply chains and promotion of human rights due diligence based on the Guiding Principles” as government initiatives to promote corporate responsibility to respect human rights. In addition, the statement of expectation from the government to companies was that the companies would adopt the process of human rights due diligence. Thus, in this case, governmental support for the fulfillment of corporate responsibility to respect human rights is also necessary.

Based on the above, we make the following recommendations to companies and organizations. 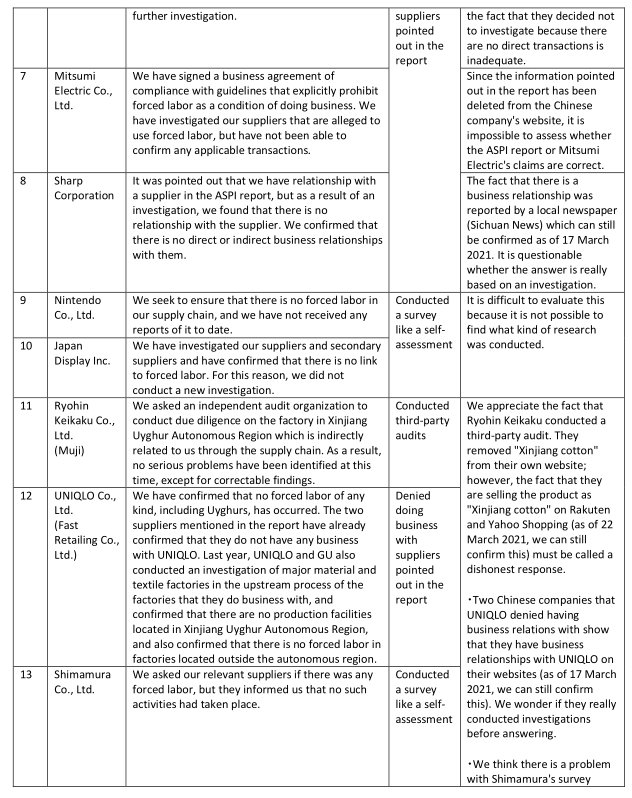 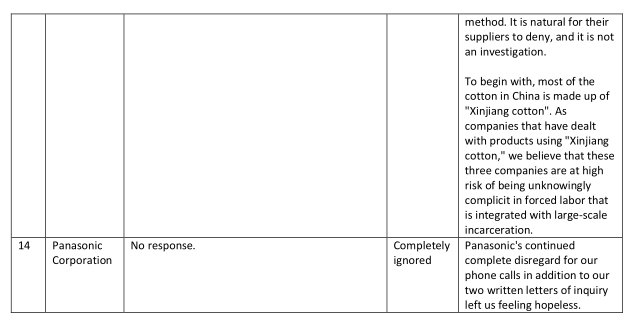 [9] However, in March 2021, the BCI’s China office claimed that there was no evidence of forced labor taking place.

[10] A list of individuals and companies that the U.S. Department of Commerce’s Bureau of Industry and Security identified as being contrary to U.S. national security or foreign policy interests or as being of concern for the proliferation of weapons of mass destruction.