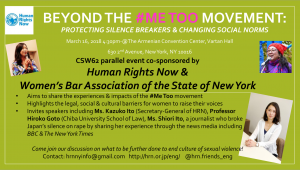 Event Details: Human Rights Now and the Women’s Bar Association of the State of New York are co-organizing a panel session titled “Beyond the #MeToo Movement: Protecting Silence Breakers & Changing Social Norms” to tackle Japan’s silence on sexual assault & harassment. As thousands of women around the world gather in NYC during the sixty-second session of the Commission on the Status of Women (CSW62, March 12-23), Human Rights Now will discuss how to break social, cultural and legal barriers within a society that discourage women to speak out. Further, the discussion aims to highlight how the legal and social system can support access to truth and justice and provide an effective remedy for survivors. The discussion will be followed by a Q&A session.

Speakers: The event will include three panelists.

The event is open to the public.

About Shiori Ito: Shiori Ito’s experience illustrates the massive challenge for women in Japan to raise their voices and pursue truth and justice for sexual violence. After she revealed that she had been assaulted by a politically influential journalist, neither the social nor the legal system sufficiently helped her with her claim. Instead, she experienced media silence and a massive backlash by society.