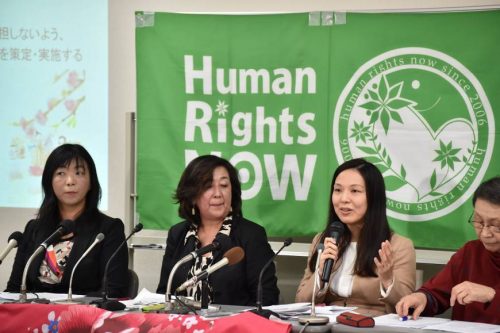 Human Rights Now at a news conference in Tokyo to support women abused by the pornographic film industry. | AFP-JIJI

Human Rights Now published a report on “Human Rights Violations against Women and Girls Manifested from the Adult Pornographic Film Industry in Japan” on March 3, 2016.
The investigations revealed the exploitation of women coerced to appear in adult videos. Production companies deliberately misled young women and forced them to perform non-consensual sexual acts.

The Independent reported on HRN’s investigations on violence against women and girls in the adult video (AV) industry in Japan. The article mentions the issues brought up by HRN in its report. The women were lied to in order to make them sign contracts; then they suffered physical and psychological abuses as well as financial pressure. This violence led to the suicide of one of the victims described in the report. In addition the article mentions a sharp increase of cases reported in recent years according to Lighthouse, a charity fighting against human trafficking in Japan.
The Independent [16/10/13]: Increasing number of Japanese women ‘forced into porn’, report claims

The Guardian picked up on this story as well. In an interview with Kurumin Aroma, a victim the exploitation described in HRN’s report who has now become an activist, the British newspaper refers to HRN’s revelations on the violence against women and girls in the adult film industry in Japan. In this article Kazuko Ito comments on the lack of supervision of the AV industry and the need for legislation to prevent those practices.
The Guardian [15/05/2017]: Forced into pornography: Japan moves to stop women being coerced into sex films