Event: 16 March Exploitation of Women in the Entertainment Industry 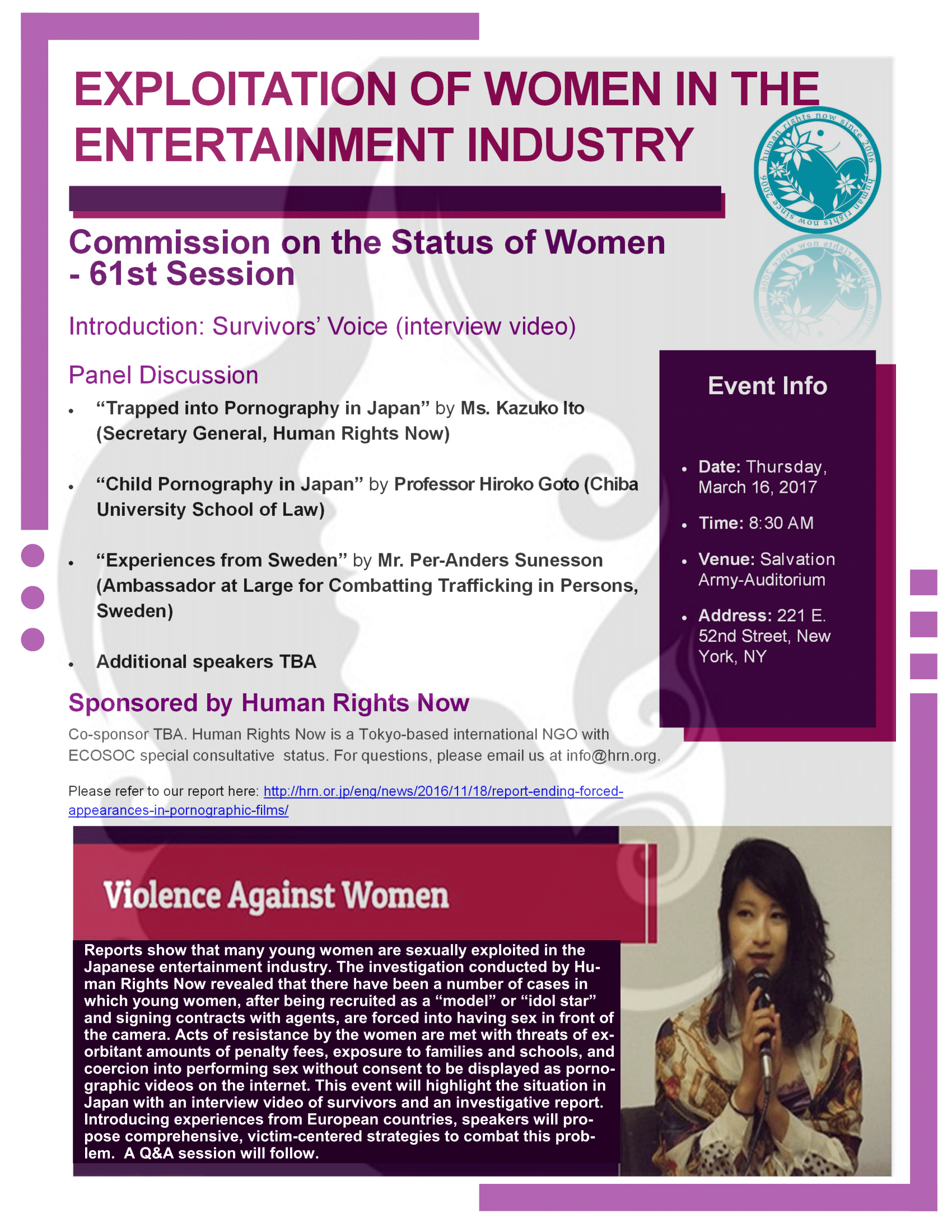 On March 16, 2017 Human Rights Now will be co-sponsoring a discussion on the “Exploitation of Women in the Entertainment Industry” with Women’s Bar Association of the State of New York (“WBASNY”). Please join HRN’s Secretary General, Kazuko Ito, and other panel speakers in New York at the 61st Session of the Commission on the Status of Women.

Reports show that many young women are sexually exploited in the Japanese entertainment industry. The investigation conducted by Human Rights Now revealed that there have been a number of cases in which young women, after being recruited as a “model” or “idol star” and signing contracts with agents, are forced into having sex in front of the camera for adult pornography. Acts of resistance by the women are met with threats of exorbitant amounts of penalty fees, exposure to families and schools, and coercion into performing sex without consent to be displayed as pornographic videos on the internet. These systematic practices constitute grave violations of human rights, especially of women and children. This event will highlight the situation in Japan with an interview video of survivors and an investigative report. Introducing experiences from European countries, speakers will propose comprehensive, victim-centered strategies to combat this problem.

Open to the public. Admission is free. No UN pass is required to enter the building.

Professor Hiroko Goto is a professor of Chiba University School of Law in Japan, Vice President of Human Rights Now, Board member of Japan Association of Gender and Law, Board member of Japanese Association of Victimology, Member of Science Council of Japan, and as a former expert member on violence against women for the Gender Equality Bureau was involved in the Basic Plan for Gender Equality in Japan. After receiving her LL.B. and LL.M. degrees from Keio University in Tokyo, where she also completed her Ph.D. studies in criminal law, Professor Goto became a leading expert on Japanese juvenile law and gender law. She has published many works in both English and Japanese on these topics.

Per-Anders Sunesson, who is a lawyer, has been working both in Sweden and internationally for more than 20 years with social and criminal policies, crime victims issues, children’s rights, legislation and welfare systems. The Swedish government appointed Mr. Sunesson Ambassador at Large for Combating Trafficking in Persons in May 2016. Prior to this assignment he held the position of Deputy Director General at The Ministry of Health and Social Affairs where he was in charge of the Division for Family and Social services. Between 2009 and 2012 he was Director for the Department of Supervision of all healthcare institutions, healthcare personnel and social services in Sweden. He has also worked several years at the Ministry of Justice.