The World and Japan: Let’s talk about our future.

Held for the 10th anniversary event of Human Rights Now.

On 23 July 2016, Human Rights Now (HRN) held its 10th anniversary event, the theme was “The World and Japan – Let’s talk about our future”, to which 170 attendees joined. At the event, we discussed HRN’s past activities and achievements and the future of the world and Japan. We were joined by prominent guests and people who have supported HRN’s activities over the years.
Value “present” activities seeking for human rights

10 years have passed since the establishment of HRN thanks to support by a lot of people. To commemorate the 10th anniversary of HRN, we held the 10th anniversary event at Restaurant Alaska, Tokyo on 23 July 2016. Many people who have supported the activities of HRN gathered at the restaurant which had a view of Hibiya park and the Imperial Palace. We had great time with them there!

Ms. Shin Hae Bong, HRN’s president who was newly elected in the general meeting held prior to the 10th anniversary event, expressed her thanks to people who have supported HRN’s activities and stated that she would like to value the present accomplishments of HRN in seeking to uphold human rights.

Following the statement by Ms. Shin Hae Bong, the panel discussion was held under the theme of “The World and Japan – Let’s talk about our future”. We were joined by:

Ms. Kamikawa mentioned that she has interest in what extent marriage equality becomes common in Japan. While same sex marriage is being adopted in many countries, there exist strong opposition campaigns, against adoption for example. In the United States, the Supreme Court held that to denying same sex couples the right to marry was unconstitutional. On the other hand, there are some states in the U.S. that are attempting to make it difficult for individuals to change the sex they were designated at birth. In Japan, when Setagaya ward and Shibuya ward began recognizing same-sex unions, those ward offices received a lot of protest messages. Ms. Kamikawa said we need to acknowledge that there are LGBT people around us. She hopes her involvement with the Rainbow Parade and spreading positive messages will overcome those prejudices.

Subsequently, Ms. Miura asked each panelist to send a message to young people who will play important role in the future society. In response to this, Mr. Isezaki proposed that young people should not pay too much attention to elderly people’s opinions. Explaining this, he stated that Japan has not regained its sovereign power indicating the fact that Japan does not have the right to control airspace over the U.S military bases located in Japan. He emphasized the importance of Japan regaining sovereign power.

Ms. Yasuda stated, based on her own experience, that selecting appropriate words is important when discussing recent violence against minorities. The words the speaker chooses to use, greatly effects how the recipient of the word feels. Ms. Yasuda emphasized that we can start selecting words right now which make the recipient hope for their future.

Ms. Ito said that issues in the society should be resolved by young people rather than the senior generation giving the Umbrella Revolution in Hong Kong and democratic movement in Myanmar as examples. She also pointed out that there are some recent activities initiated by young people in Japan including activities for LGBT and against amendment of national security law, and added that the support of elderly people to those activities by young people is important.

Statement of encouragement by supporters 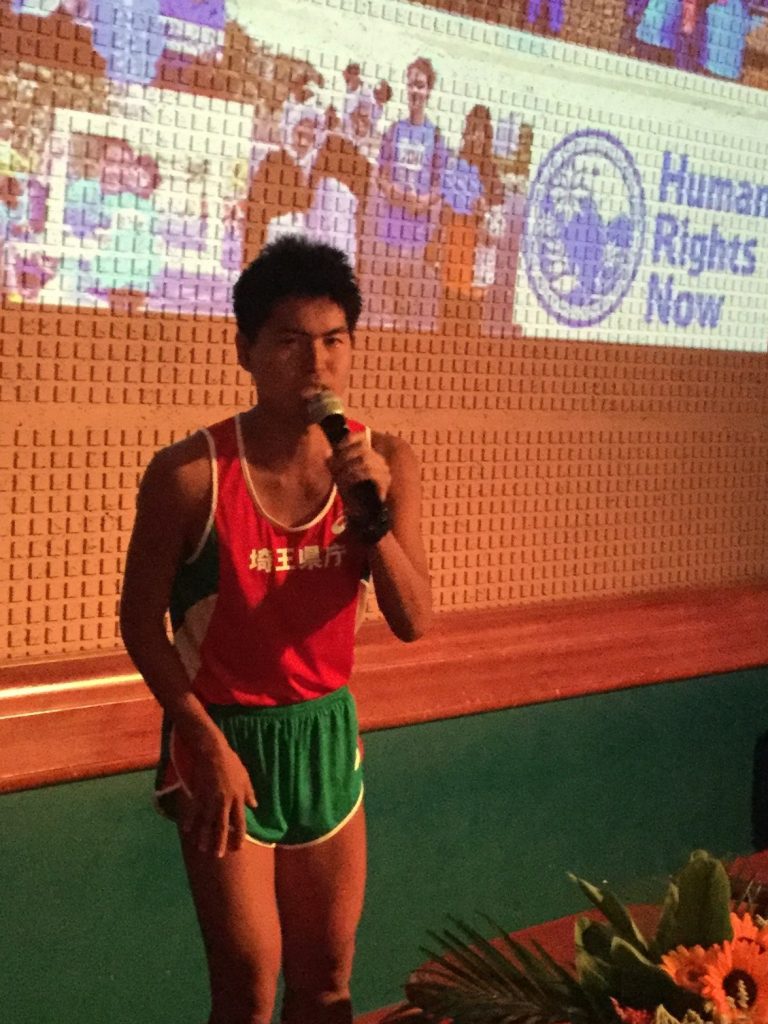 After the panel discussion, food and drinks were served and the celebration commenced. Mr. Kunio Hamada, an advisor to HRN, gave an outline of HRN’s activities over the past 10 years. During the celebration, supporters of HRN made, in turn, their speech to encourage HRN’s activity. Among those speeches, Mr. Hideki Wakabayashi, an executive director of Amnesty International stated “the swiftness and mobility of HRN is great. Without such mobility, we cannot deal with problems in our society.” This statement encouraged us to focus on utilizing these strengths. Rounding out the dinner, a performance by TV personality M. Takashi was enjoyed immensely.

Following the meal, a panel discussion was held under the theme of “Our activities and human rights issues we need to know” with following panelists;

During the panel discussion, HRN’s activities in past 10 years were reviewed. During the discussion, Ms. Ito said “we cannot do something by ourselves without support from you, and we appreciate your continuous support for our activities using your knowledge and expertise.” 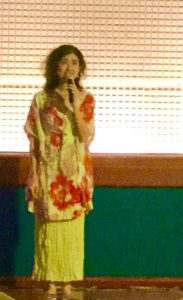 In the last part of the evening, we were treated to a performance by singer, Ms. Shigeko Suzuki. She sang a song “Ito” composed by Japanese singer and composer, Ms. Miyuki Nakajima, with her hope that human connections made at the HRN 10th anniversary celebrations would improve the life of people around the world.

After the song by Ms. Suzuki, Ms. Hiroko Goto, Vice-Administrative Director of HRN, made a closing statement, expressing her desire for HRN to delve further in various fields and directions while also reflecting on past activities. The 10th anniversary event was closed with attendee’s expressing their expectation and hopes for next 10 years. 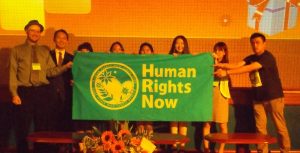 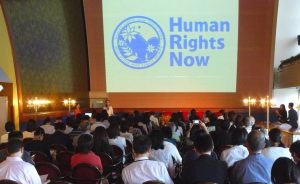 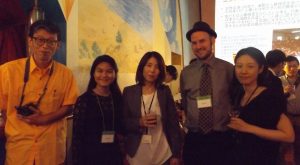 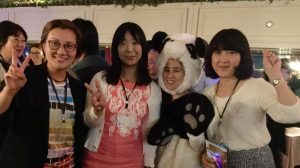 This event was sponsored by Nishimura Asahi Law Firm and Sakura Kyodo Law Office with 10th anniversary donation made by many supporters including Mr. Hideaki Kubori, an attorney at law. We greatly appreciate their support.