A discussion on the relevance of the Universal Declaration of Human Rights to today’s cutting-edge human rights issues of inequality, climate change and new technologies

On 10 December 2018 (Human Rights Day), an event titled “Still Powerful: UDHR@70” was held at United Nations headquarters in New York City. The event aimed to celebrate Human Rights Day as well as to commemorate the 70th anniversary of the Universal Declaration of Human Rights, a milestone document in the history of human rights since proclaimed by the United Nations General Assembly in 1948. Below is an event summary written by NY representatives for Human Rights Now. 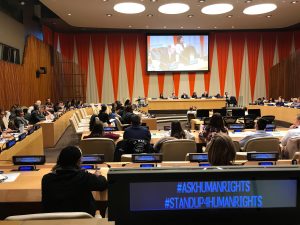 After an opening remark was made by Mr. Andrew Gilmour, Assistant Secretary-General for Human Rights, and a video message from UN Secretary-General Antonio Guterres was delivered, Ms. Sherine Tadros opened the panel session. She first pointed out that, despite the frequent criticism that the human rights framework is overly idealistic, in fact the Universal Declaration for Human Rights was adopted not when times were easy, but at a time—the wake of World War II and the horrors of the Holocaust—when it seemed that it was the surest way to avoid a repeat of the worst human-made devastation.

Mr. Brett Solomon spoke first, addressing the unique role that technology can play as a tool both to advance human rights and to attack them, whether at the hands of oppressive regimes or profit-driven companies.

Mr. Solomon pointed out that we are at the beginning of digital revolution, in which traditional human rights challenges have been translated into the digital sphere: these prominently include data breaches, violations of digital privacy, and private sector–controlled digital spaces, and states that seek to monitor and suppress access to information and free speech. Other inequalities in human society are also echoed in our technologies: information that is trapped behind paywalls replicates economic inequalities in the real world. What happens to those who cannot afford to be connected? The possible end of net neutrality could further entrench these inequalities when connectivity itself ceases to be equal-access. Likewise, who is responsible for disrupting societal discrimination when digital algorithms learn and replicate discriminatory human structures and behaviors?

Mr. Solomon highlighted that the unspoken question in all of these challenges is: who is responsible for human rights violations when they are facilitated by modern technologies? The world has already seen that internet connectivity is both essential to modern life and the building block of authoritarian states.

The use of digital identities can also present challenges to protecting rights. Mr. Solomon underscored that rights offline must also be protected online: this remains, as always, the duty of the state, and states are increasingly failing this duty in democracies and non-democracies alike. He pointed in particular to state failures to regulate the private companies who control more of our data than states themselves do, as well as state efforts to actively undermine rights. He also highlighted the need to engage big tech companies like Facebook and Google, given their outsized positions of power.

Mr. Solomon pointed to the Tunis Agenda for Information and Society as a solid foundation on which to build toward better protection of human rights online. He urged that the United Nations must innovate and become more nimble in its responses if it wants to remain relevant. One key is that the U.N. should seek to mirror the multi-stakeholder nature of cyberspace. Likewise, state and private actors must act to protect rights. For example, European states must stop allowing other states to buy surveillance equipment which is then used to violate human rights elsewhere. He called on various private sector actors including Facebook, Google, and Twitter to recognize that business strategy must protect rights as a rule, not an afterthought. He also suggested greater transparency in algorithms so as to enable efforts to recognize and prevent discrimination.

Mr. Alex Losnack described his and his fellow students’ efforts to hold the U.S. government accountable for climate change through legal action and discussed ways that young people can become more involved in fighting for human rights.

Mr. Losnack highlighted certain recent, bleak, climate-related events, such as the United States government’s decision to bury the very damning official government climate change report and the already-widespread negative effects of climate change on global health, with increased natural disasters and unprecedented heat waves. He also called attention to the inspiring actions being taken by youth all around the world, including groups of young people in Colombia and the Netherlands, to take action against their own governments on the basis of their right to a clean and healthy environment. Mr. Losnack then discussed the pending law suit that he and his fellow students brought against the U.S. government in order to force it to take responsibility for protecting its citizens from the negative effects of climate change. In his closing, he pointed to the great climate challenges that face young people today: according to a recent United Nations panel report, climate chaos threatens to make much of the planet uninhabitable within his generation’s lifetime. He then called on young people to get more involved, starting at the local level, in order to improve the world that they are inheriting.

Ms. Nadia Daar, the head of office at Oxfam International’s Washington D.C. office, discussed the growing problem of global economic inequality and poverty. She began by pointing out that poverty and extreme inequality are not inevitable by-products of society but unsustainable choices that are made by policy. Although there is nothing inherently wrong in some people having a lot of money, it is important to recognize that extreme wealth leads to political capture: the wealthy have the power to influence laws, policies, elections, and access to information so as to perpetuate their own wealth and, as a byproduct, others’ poverty and disempowerment. As an example, she pointed to the degradation of organized labor rights that is directly linked with rising wealth inequality. Another result of political capture is tax laws and regulations that favor the already-wealthy and deprive those in need of basic human rights: for example, countries in Africa lose $14 billion in tax revenues due to corporate tax evasion—enough to pay for health care for everyone living on that continent. She further highlighted that gender and wealth inequality are inextricably linked, as most of the world’s poorest people are women.

Ms. Daar closed by pointing to examples of positive actions that governments can and are already taking in order to address these problems. For example, South Korea increased minimum wage, levied increased individual and corporate taxes to fund increased social protections and health services, while Iceland recently became the first country in the world to make it illegal to pay women less than men. Ms. Daar declared that it is up to governments to show the world that a more human economy is possible and achievable.

Ms. Tadros opened the Q&A session by asking Mr. Solomon how he thinks we can convince technology companies to respect human rights and understand their importance.

Mr. Solomon answered that we must first recognize that Silicon Valley is not the only generator of technological innovation and powerful companies: this is happening all around the world, including in large part in China.  More broadly, Mr. Solomon advocated for focusing on the tech business model: digital ID is a central component of how these companies make money. We should urge companies to have a more “self-sovereign” approach so that people can control their own data, while user policies, code, and algorithms must be fully transparent. How do we as citizens and users demand accountability and protection from the tech sector? Does the tech sector need to be regulated to protect against monopolies? The bottom line is that tech companies have not properly self-regulated, leaving governments responsible for ensuring that they operate differently in future.

Ms. Tadros then asked Mr. Losnack to share advice on how young people can become engaged.

Mr. Losnack answered that young people looking to make a difference should start small and local and work their way towards bigger projects. In terms of climate change, he felt it was important to go beyond individual personal choices, and start looking at the community level to see how policies can improve. He also pointed to the young generation’s strength in numbers: youth are the largest generation yet, and by teaming together they can create change.

Ms. Tadros then asked Ms. Daar to explain a bit more as to why it matters whether the 1% continue to get richer, as long as everyone has an adequate standard of living?

Ms. Daar highlighted two key principles that should be observed. First, she stated that it is important to ensure that wealthy individuals and corporations are paying their fair share to ensure universal access to education and health care. Second, she highlighted again that corruption is strongly correlated with wealth inequality because political and elite capture directly follows when wealth is concentrated in the hands of the few. She pointed to a report, recently published by Oxfam, that documents this phenomenon in Latin America.

The audience asked a number of questions, ranging from the need to consider protections for the elderly in the digital age; online sexual harassment in social media; and the difficulty of implementing the UDHR in this current time of backlash against human rights.

In response, the panel highlighted the central issue of intersectionality and compounding inequalities: those who are elderly and poor, for example, are doubly vulnerable to the ill effects of climate change, have difficulty accessing technology, etc. They also spoke about the essential need to improve digital literacy for the elderly. The panel emphasized that the private sector and international funding cannot solve these issues: the government is the one that must provide free and equal access to essential needs like health care and education. The panel further emphasized the importance of civil society and the need to ensure that spaces continue to exist, including online, for people to hold their governments accountable.